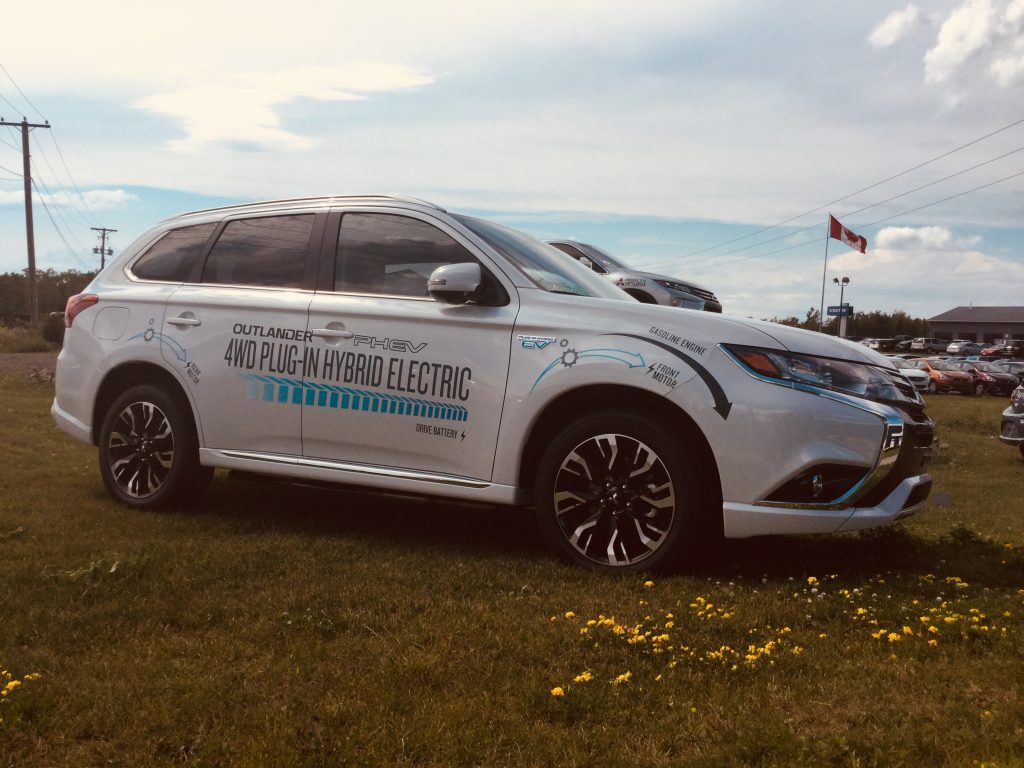 The 2018 Mitsubishi Outlander PHEV SE is powered by its 2.0-litre, four-cylinder engine and two electric motors.

The Mitsubishi Outlander is an average utility vehicle. It offers similar space and features as several others in this mid-size class in a somewhat dated style.

In terms of sales numbers, it trails the crowd. But add the letters PHEV to the Outlander name and you have a clear leader of the pack.

Canadians are not alone in embracing the Outlander PHEV. It has been the best-selling plug-in hybrid in Europe (where hybrids are hot) for the past three years and is the best-selling crossover with a plug, in the world.

The Outlander is a mid-size, five-seat, all-wheel-drive utility vehicle, like many others. There are two trim levels: SE S-AWC and GT S-AWC, with touring package available on the former. It is priced, built and equipped competitively and has a 100,000-km warranty.

But let’s look at what sets the PHEV version apart and well ahead of the pack.

The Outlander PHEV is powered by a 2.0-litre four-cylinder gasoline engine and a pair of big electric motors. It has a generator and 12 kWh lithium-ion battery pack nestled beneath the central tunnel normally used for a drive shaft.

Thanks to the abundance of torque provided by the electric motors, it does not need the gears of a conventional or continuously variable transmission to multiple torque. Instead, it uses a single speed direct drive transmission.

The engine and one motor drive the front wheels and the second motor provides power to the rear wheels. Both motors produce 80 horsepower, but the one in the rear puts out more torque — 144 lb.-ft., compared to 101 up front.

This layout gives the Outlander all-wheel-drive. Mitsubishi calls it “super all wheel control.”

The gasoline engine’s main role is to power the big 70-kW generator which provides power for the batteries and electric motors. The engine is also called on to provide motivation for the vehicle at higher speeds, under acceleration and when the batteries are low. The two electric motors also are used to recharge the batteries through regenerative braking.

The Outlander PHEV has a slick system of controlling the amount of energy that can be harvested while slowing. Paddles on the back of the steering wheel let you select from six levels of regenerative braking. The base level (0) lets the vehicle coast for a very long time when you take your foot off the accelerator. At the other extreme, level 5 slows the vehicle very quickly indeed.

The Outlander PHEV will go up to 35 km on a full charge without any help from the engine. A fully depleted the battery pack can be recharged in eight hours from a 120-volt outlet, 3.5 hours from a 220-volt outlet and up to 80 percent of capacity in 25 minutes from a level 3 fast charging station. The battery pack is included in the company’s 10-year, 160,000 km powertrain warranty.

There are three unique driving modes, selected by a toggle on the centre console.

“Default mode” is EV, which uses electric power only.

“Series mode” uses electric power for the vehicle and uses the gasoline engine to drive the generator and charge the batteries.

“Parallel mode” has the engine driving the vehicle with the motors coming into play on occasion when extra oomph is needed.

Kudos to the development team for arriving at a setup that changes back and forth between electric and gasoline use so seamlessly. Also for providing a resistive element like that in a stove or blow dryer, to heat the cab when the ignition is off to save battery power.

There are also three other modes related to the charging system.

“Battery charge” mode does exactly that, using the engine and generator to provide an 80 percent charge in 40-45 minutes.

“Battery save” — conserves battery power, until you wish to switch to EV priority for silent city driving or sneaking home late at night.

The Outlander PHEV is no rocket ship, but it does move away from rest promptly and when extra power is called for. You could conceivably drive around a city or short commute all week long without ever using a drop of gas. Or you can take it on a lengthy trip with no worries about getting to the next plug.

The driving experience is similar to a conventional vehicle whether or not you play with the various modes.

Put it in drive and off you go. At the end of the drive you might find it hard to put the transmission in Park until you notice the button hidden by the lever itself. But, don’t worry, Park is automatically engaged when you turn the ignition off.